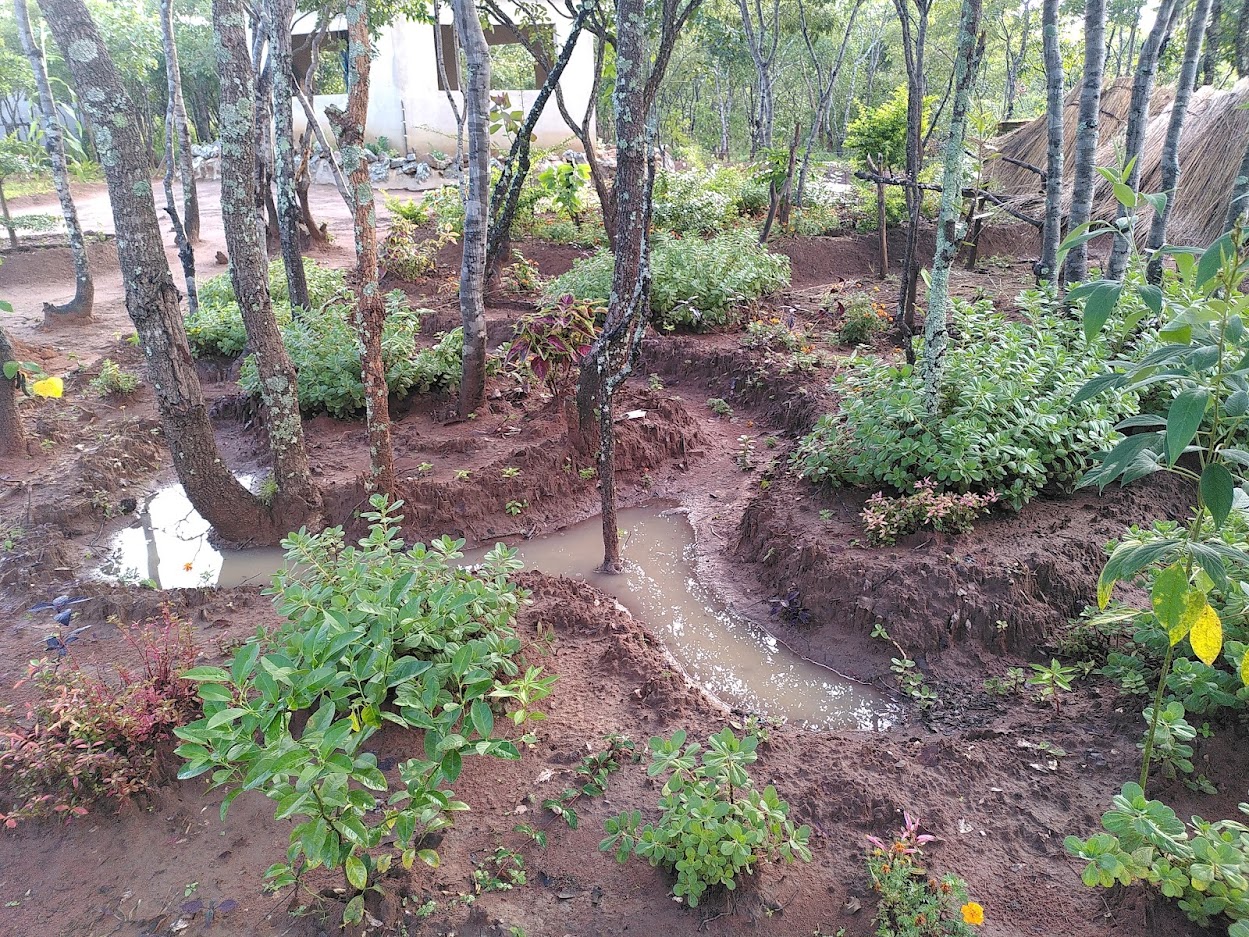 Food forests may seem relatively new in the Netherlands, but in the tropics they are not. Also in Zambia, many people have ‘kitchen gardens’: small pieces of land, close to their home, where you can grow many different vegetables, fruits and herbs in a small area. For example, bananas close to the equator also grow well in the shade of a mango tree, and there is still enough sunlight left to grow some vegetables below. By planting varieties with different harvest dates, there is often still something to eat, if there is still a bit of month left at the end of the budget.

Kitchen gardens
Traditionally, these kitchen gardens don’t just help with maintaining a nice garden climate and things like preserving old seeds[1]. They also make users more independent: wives from their husbands (who are often supposed to provide monetary capital, but not always succeed), but sometimes entire populations of their colonizers.[2] For example, the inhabitants of Kilimanjaro are said to have used them to wrestle themselves from the infrastructure of the Germans, their colonizers. Independence may seem easy when you have your own piece of land, but in practice it turns out with the Kambisa! neighborhood center in Chilonga still quite difficult. It is located in an area of ​​so-called miombo forest, which has suffered greatly from climate change, charcoal trade and poaching of sought-after hardwoods such as Mukula. To protect the miombo trees, we are constantly looking for ways to combine them with ways to make money. We have therefore instituted a felling ban, except for the place where the workshop/theatre building was built. Because of the fear of poisonous snakes and a shortage of land to grow enough vegetables, a large part of the undergrowth had to believe it.

Ditch paths
After installing a solar-powered water pump and creating trench paths to collect the rainwater, we planted dozens of fruit trees, herbs and climbers from the capital Lusaka with the help of a group of supporters from the Netherlands. In addition to local trees such as masukus and avocados, there are now cultivated varieties such as grapefruit, lemon, Valencia oranges, guavas, loquats, cream apples and grapes. They are still small and will undoubtedly compete with the existing plants in the long run, but they are doing well and are already producing the first guavas and bananas! Under all those trees, our managers Mulenga and Kenny try out different crops. Close to the community center are mainly beds with flowers and a plant that would scare away snakes with its scent, but around it you will also find fields with corn, tomatoes, cabbage, sweet potato, New Zealand spinach, cassava and various types of beans and pumpkins. In addition, you see a lot of Africans. We once brought them with us to put between the potatoes, but those potatoes are not there yet, while the flowers seem to be very popular.

Patience
A major problem with growing all those crops is the aridity of the soil. This has to do with the soil type and the rainfall pattern, but also with the history of the plot: it has previously been used as ‘chitemene’ soil: a piece of land that was cut down, burned down and cultivated until the soil was so impoverished that the user left for the next piece of land. Just like on our Dutch sister forest GeuzeGroen, we need a lot of patience and good neighbors to solve that problem. By keeping the ground covered with mulch from fallen leaves, pulled weeds and live crops like beans, we hope to prevent further leaching and slowly help build fertile soil. In the coming years we also hope to be able to make more bokashi and compost, so that we can give back to the soil what was previously taken from it.

Neighbour
Meanwhile, Mulenga, Kenny and their families must have something to eat. That is why we also enlisted the help of Mama Matete, a retired teacher who, in addition to fish ponds, fields and orchards, has a whole lot of goats and cows that produce the necessary manure. As soon as the rain stops and the manure is a bit drier, we can create the whole (old) hope for it to slowly spread over our country, in the hope that the yellow leaves will turn green again, and the plants will bear full fruit. Goats are too invasive for our own piece of land, but with a bit of luck we will get a set of ducks this summer, which will probably also make their stinking contribution.

[1]   in many countries traditionally an old wives’ tale, which is now actively combated in some countries, because those old seeds would pose a threat to industrial breeders

[2] Those who saw our previous presentations may have heard of the Chagga system on the slopes of Tanzania’s Kilimanjaro. On the fertile volcanic slopes, the mountain people combine crops that they could eat themselves with crops that they could sell, so that they could not only live self-sufficiently but also earn some money to continue their struggle for independence against the colonizer.